VWP Waste Processing approached us to create a promotional-come-demonstration video for the “VWP”, their innovative technology solution for recycling organic waste into useful products such as briquettes, pellets and biofuels. As a start-up business with a potentially revolutionary approach to a major global issue (waste management), it was clear that using video would dramatically help with communicating the benefits of their system to potential customers, partners and investors around the world.

As the video needed to be comprehensive in conveying the VWP process and the scope of its utility, the first step in the process was for the client to provide us with a draft script for the video so that we understood what the focus of the video would be. After receiving this, our team visited VWP’s site in Dorset to view the facilities and equipment so that we could decide on our approach towards filming it.

After the initial site visit, our team put together a storyboard for the video which shared our vision of what would appear on-screen during key parts of the script. It also allowed us to review our approach to certain challenges. For example, the interior of the VWP could not be captured on camera during operation due to extreme heat and motion, so we chose to use animation to demonstrate this part. 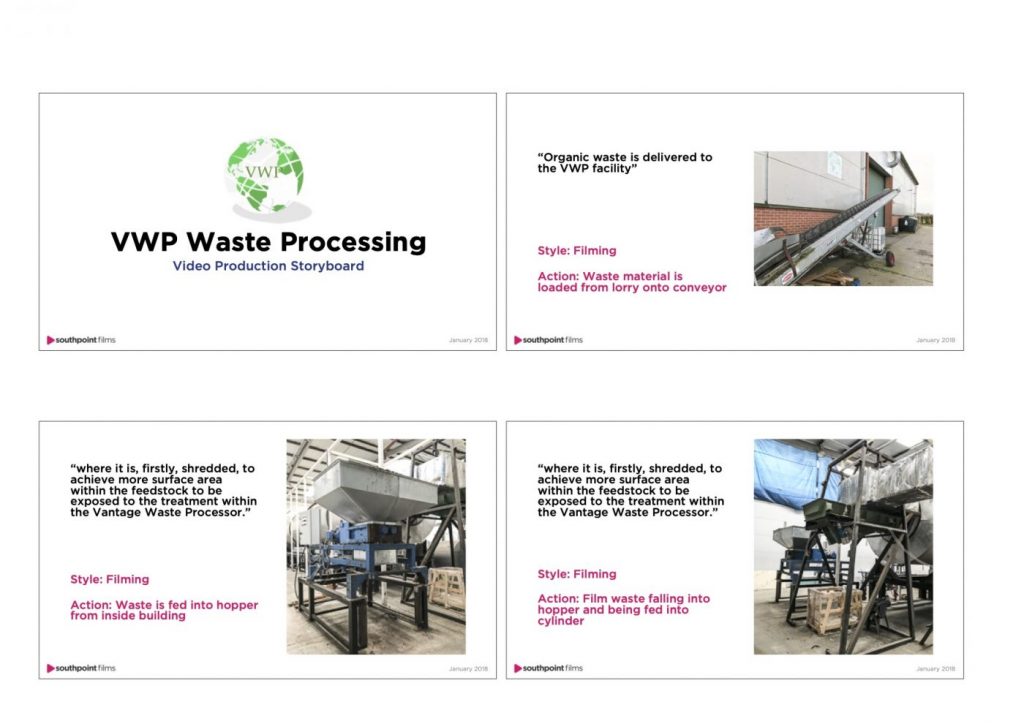 During the filming process, which spanned a few days, we captured footage of the VWP in action as well as an interview with VWP Waste Processing’s Chief Operating Officer, Gordon Devlin.

Behind the scenes, the interview with Gordon was used as the basis of the final voice-over script, which we wrote and had recorded by one of our professional voice-over artists – although we liked some of Gordon’s interview so much that we included it in the final video. (Including a member of staff in a video is a great way of giving a “face” to a company, which helps with building rapport with customers.)

The final video features footage of the VWP equipment, some animation to demonstrate the VWP process, the interview with Gordon, and is narrated by a professional voice-over artist. We’ve also created versions of the video for use in different markets where certain messaging needed to be changed – such as a version for Middle Eastern countries where the references to alcohol are removed.

Our crew went out to capture the day in the life of one of TJ's 8 wheel tipper drivers, Chris.