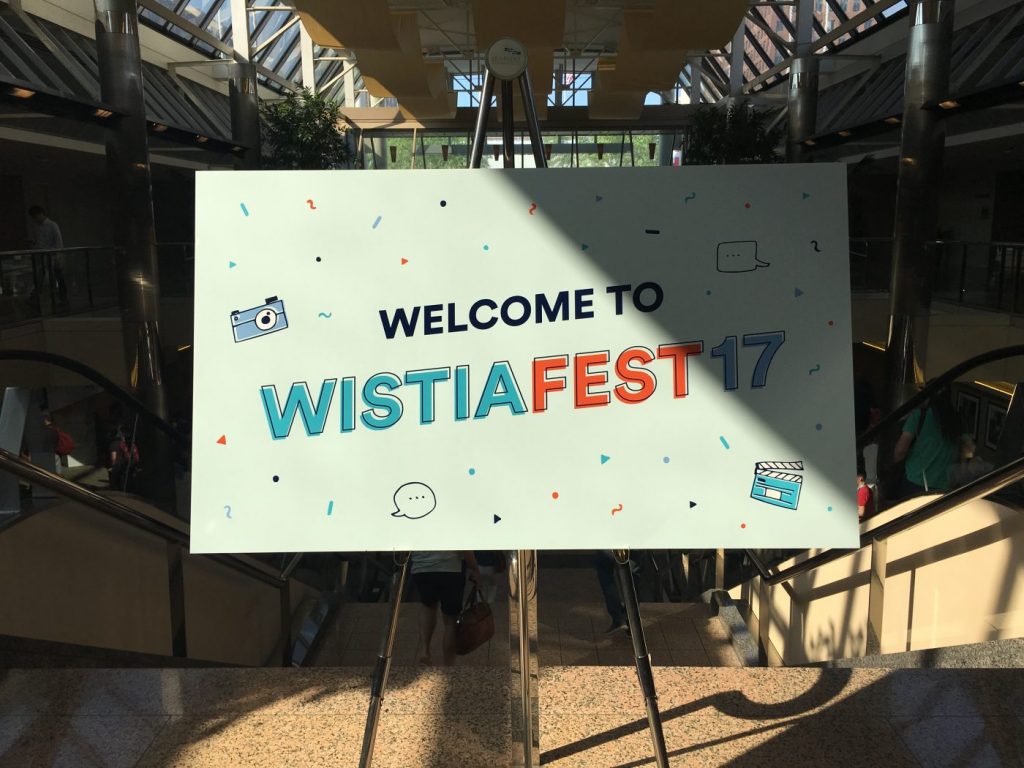 Wistia have since announced that they’ve will on longer be running Wistiafest, making 2017 the final year. Such a shame!

Wistiafest is an annual conference from the folks at Wistia, a business-focussed video hosting and marketing platform. The conference has run annually since 2014 and takes place in Boston, MA, USA.

I’ve wanted to go to Wistiafest for a few years now. Although the conference itself is fairly affordable – $850, with early bird discounts available – it’s quite an investment when you also consider the travel and accommodation costs as well (and the cost of being away from the office). But this year I bit the bullet and decided I had to be there.

Here’s a taste of what I experienced…

Undeniably, the main reason to go to Wistiafest is for the conference sessions. There are keynotes from industry leaders every morning, while the afternoon breaks out into a choice of sessions which cover topics such as production, content strategy and using video as an agency. There’s something for everyone.

I found myself mostly in the agency track, but often found myself wishing I could attend multiple sessions that were happening at once. The good news is that all of the sessions were filmed and will be shared with delegates to watch at their own leisure in the future. I can’t wait to recap and watch some of the sessions I missed.

If you’re interested in using video for your marketing or product support then you’ll take a lot of great tips and advice away. You’ll be itching to start putting theory into practise before the conference is even halfway through.

In addition to simply being inspired by industry leaders, there’s a good chance that you’ll get to meet them too. Most of the speakers come to enjoy the conference as well, so will take part in the other activities throughout the day. As you’ll see in the picture above, I bumped into Adam Lisagor of Sandwich Video at the conference after-party. Adam was one of the main speakers at the conference.

Additionally, if you’ve spent the same amount of time watching Wistia’s videos as I have, you’ll no doubt recognise a number of faces when you arrive at the conference. It’s great meeting the Wistia team, and I even got to give Chris Lavigne a hot tip of my own…

On a similar note, Wistia hosts a welcome party at their HQ. Just like meeting the Wistia team, seeing where the magic happens is very exciting if you follow their company. It’s a little bit like a movie studio tour, except they provide you with free food and drinks. (Cheers!)

Make friends and grow your network

The biggest benefit of going to Wistiafest is meeting fellow delegates. Everybody at the event is interested in video production and using it creatively within their businesses. Plus everyone is incredibly friendly.

I met people from the US, Canada, and plenty of fellow Brits, who all use video in some way within their businesses. It was great being able to talk openly about common problems, talk about kit, talk about business, and so on.

Wistiafest is designed through and through to encourage a sense of community. Some of my fellow delegates described it as being “like camp”.

This year the event opened on Sunday evening with a party at Wistia’s office, there was a closing party on Tuesday once the conference had finished, and the highlight was a boat party on the Monday night that took us around Boston harbour for a few hours so that we could meet each other, socialise and have fun.

The party didn’t stop with the conference schedule either, and many of us would continue socialising at nearby bars until the early hours of the morning. It made for a pretty intense few days, but this was perhaps the most valuable part of the conference in my opinion.

In many ways, Wistiafest reminded me of attending the NaSTA conference when I was a student, where I also found myself talking to fellow delegates at 3AM after a few drinks too many. While it’s hard to pitch this angle to your boss, some of the people I’ve met through NaSTA are the strongest professional connections I have now, and I feel optimistic about Wistiafest’s impact too. Regardless of who you’re talking to, you’re making a professional connection in one way or another.

Put simply, don’t expect to leave Wistiafest with a fistful of orders, but do expect to leave with a stronger network than you had before you left. That in itself is valuable, and doubly so when coupled with the excellent conference content.

If you’re like me and you’ve never been to the USA, the trip to Wistiafest is exciting enough for that reason alone. But even if you’re already in the states, visiting Boston is a great experience.

The scheduled Wistiafest events don’t start until Sunday evening, which gives most travellers the chance to see some of the city before it gets going, if they’d like. I also took a couple of days after the event to go sightseeing and experience a little bit more of the local culture. I really enjoyed spending a few hours walking through Boston common and the historical areas, and Cambridge (where Wistia is based) is well worth spending some time in; it has a strong cosmopolitan feel. I’d highly recommend it.

The long and short of it

Although I’ve spoken highly about the social angle, the event caters to a variety of tastes. The conference content is strong; so strong that meeting people has to be pushed into evening events. But that doesn’t mean you’ll miss out if you’d prefer not to go. There are opportunities for networking within the conference itself, just not as many.

Am I going to be going again next year? If I have the time and budget, absolutely!