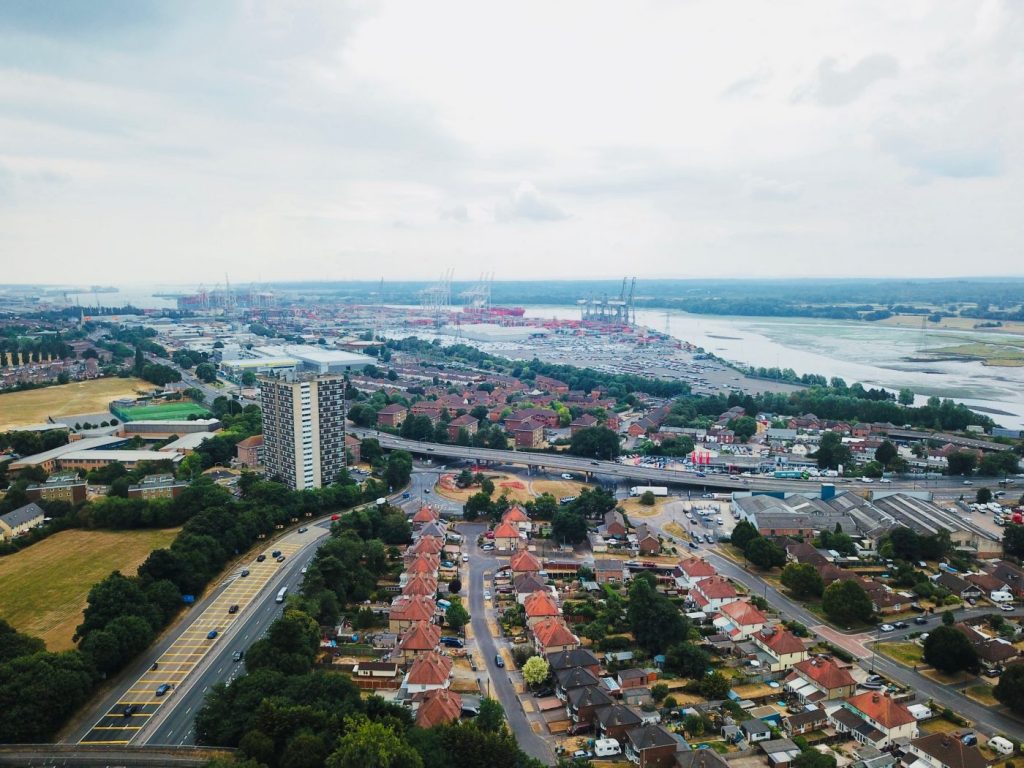 I met somebody recently who told me that nothing ever happens in Southampton. I was shocked. Speaking as somebody who’s consciously made the decision to live here for almost a decade, one of the biggest appeals for staying in this city is that there’s always something going on. Seriously.

Unfortunately this opinion isn’t uncommon, and I think it’s partly because Southampton has struggled to create a solid identity for itself for a while now, being torn between being an industrial port town, a destination city for cruise ship tourists, a retail hub, a student city, and a gateway city to the rest of the South. The truth is that it’s all of these things, but it can be hard to see the bigger picture if you’re only exposed to one aspect of what this city has to offer.

Southpoint Films has been based in Southampton since we started out in 2013. We love this city and everything it has to offer to us as a business, and to us as individuals.

Last year the powers that be announced that Southampton would be looking to bid for UK City Of Culture 2025 – and in my opinion, the city has never been in a better position to go for it.

To do my bit to dispel the myths and help promote what I think makes this city great, I thought I’d share some of the things that keeps me and Southpoint Films here in Southampton.

Southampton has a thriving music scene, and it’s only getting better. Regardless of your music taste, it’s likely that you’ll be able to find a venue or two, if not more, that’s putting on something you’ll enjoy.

Whether you’re looking to see a rock band at The Joiners, a jazz concert at the Turner Sims, a folk performance at The Platform Tavern, a tribute band at The Brook, a DJ set at Switch, or a concert at the O2 Guildhall, you’ll find that Southampton has everything from excellent local independent musicians to well-known touring artists playing in the city regularly.

And I should note that the above is only a sample of what’s available. I was tempted to list more venues and genres but that could be an entire post in and of itself – especially when local event organisers such as Sofar Southampton are turning unexpected locations such as coffee shops and even rock climbing centres into one-off music venues for their bi-monthly shows.

If you’re looking for a good place to get news and information about upcoming shows in Southampton, take a look at the So Music City facebook page. So Music City is a campaign to raise more awareness of music in the city, and they’ll often aggregate a list of upcoming events to check out.

My personal impression of the music scene in Southampton is that there’s always something available on any given evening. Sometimes you’ll even be left stuck for choice because there will be great gigs going on in multiple venues on the same night. That’s not a bad problem to have!

In addition to being a nice thing for people who live in this city, a thriving music scene boosts our local economy. It brings money into small venues (which they can spend on services from other local businesses) and provides a legitimate foundation for Southampton’s many musicians, which brings cultural clout into the city. Southampton already has a few successful musicians to its name, such as Craig David and Band of Skulls, but we could certainly do with some more.

Southampton is a fantastic city for sports. For starters, Southampton has a very successful football team and St Mary’s Stadium is a hive of activity on match days. (As is the rest of the city too!)

Even if you don’t support the Saints, the fact that Southampton FC tends to play against other major football teams means that your favourite team could very well be coming to Southampton for a local match in the near future. And if you do support the Saints you’re in luck because you’ll be in the perfect place to watch them when they play on their home turf.

Aside from the football, Southampton is also a great spot for sailing. Even if you choose not to set sail from Southampton, you’re in close proximity to plenty of great spots along the Solent, such as Lymington, where races happen often.

The Solent is an excellent sailing spot with the annual Cowes Week regatta happening each year, and seeing hundreds of boats out on the water is always a sight to behold even if you’re not a sailor yourself.

That said, there are plenty of ways to get involved and having such a big sailing event on Southampton’s doorstep makes attending very accessible. For example, we’ve filmed corporate events that have taken place during Cowes Week where our client has treated their customers and colleagues to unique sailing experiences during the races – something that isn’t possible in many other cities!

Southampton is not a great place to be on a diet. The city is packed with fantastic restaurants and eateries, and the temptation is unreal.

No matter what you fancy, or what your dietary restrictions are, there’ll be an option somewhere. Whether it’s a dirty burger with a side of frickles (deep fried pickles) at 7Bone Burger Co in Portswood, an equally unhealthy (well maybe slightly healthier) but animal-friendly vegan burger at Café Thrive in the city centre, an ice-cream drenched waffle at one of Sprinkle Gelato’s various branches, or something else entirely, the options are almost endless.

The recent addition to West Quay shopping centre has been a great boost to the city’s food options too, as it’s packed with major restaurants such as Wahaca, Five Guys, and TGI Fridays. If you fancy trying out the latest menu at one of these chains you won’t have to travel outside of the city.

Southampton is also a great spot for smaller meals too, with a plethora of coffee shops dotted around the city. Coffee Lab, Mettricks and CafeMonde are particular favourites of ours, although none of them are in Totton (yet) which means a trip into town to enjoy them – but their food (and coffee!) is certainly a good excuse to do some remote working for an afternoon…

Best enjoyed sensibly, and certainly not on a school night, I would be hard pressed not to mention Southampton’s nightlife offerings as a factor in why living in Southampton is great.

There are plenty of successful night clubs, such as Switch, Suburbia, Popworld and – dare I say it – Oceana, which give partygoers plenty of options for having a night out on the town with friends. I won’t offer any further comment on my personal experiences here…!

If you’re not really into night clubs there are plenty of pubs and bars too. Brewdog, London Road Brew House and The Alex are particular favourites of mine but, like with music venues, there’s something for everyone’s taste. Bedford Place is good area to find something.

Nightlife is often overlooked as a positive factor for cities, with many people associating it with loud, anti-social behaviour and binge drinking – and while it’s certainly not an unfounded criticism, having a bustling nightlife is a huge boon to the local economy. It certainly helps to keep our local taxi drivers busy, that’s for sure.

From the perspective of a creative business, nightclubs and bars are some of the biggest utilisers of the creative industries as crafting their image is one of the most important factors in their success. They all need graphic designers for their posters, social media experts, club photographers and also videographers, and these jobs are a great way for up and comers in these industries to cut their teeth and develop a work ethic.

Additionally, these venues will often host or sponsor other cultural events in the city, which all serves the purpose of getting people out of their homes and engaging with what’s happening in Southampton.

I hate to say it but one of the best things about Southampton is that it’s connected to lots of other places that are also very good.

This benefits runs the risk of devaluing Southampton by its own merit, but it’s worth mentioning that you can very easily get to Portsmouth, Bournemouth, Winchester, the Isle of Wight and the New Forest – all of which are also excellent places with unique benefits in their own right.

Whether you travel by car or public transport, most journeys to these places will usually take less than an hour, which makes it very feasible to travel around. (Don’t try driving to the Isle of Wight though – not unless your car is amphibious.)

Additionally, London is only a short train ride away with most journeys taking less than 90 minutes. Trains to London run regularly, with return journeys running until after midnight, which makes a day out in London very easy. (We do a lot of work in the capital for this very reason!)

Southampton is also lucky enough to have a commercial airport with frequent trips to designations in Europe such as Dublin and Amsterdam, as well as flights to other UK cities. This is really useful for business, but also great for taking a short break – travelling from Southampton Airport is far easier (and often cheaper) than travelling up to a London Airport. The airport is a huge boost for the city.

Finally, Southampton has a massive cruise terminal. If you’re looking for a longer break to somewhere a bit more exotic than the airport offers, you might be able to get a local cruise. Plus, seeing the cruise ships docked in the city can be breathtaking – especially when they tower over everything beneath them.

A City For Industry

Southampton is packed with established businesses who’ve chosen to make their base here – including Southpoint Films!

We’ve worked with companies who manufacture cleaning machines, repair and service turbo chargers in large ships, build heavy duty computers for industrial applications, build automated robotic machinery, and so much more, all from their facilities in Southampton.

My point here is that Southampton is a very strong city for business, and there’s a lot of support for new businesses too. We see this firsthand thanks to our involvement with Venturefest South. On the one hand, if you’re entrepreneurial it means that there’s a higher chance you’ll succeed here, but on the other hand it means there are jobs and careers for a wide variety of industries.

Living in a city requires earning enough money to live in that city, and I think Southampton has enough prospects for this to be a reality for a significant number of people. It’s just a great place to be.

If you can’t tell, we’re really passionate about our city. We love living and working in Southampton, and we’re really glad to be based here.

This is just a brief overview of what we love about Southampton, but there’s so much more. For example, we haven’t even touched on the city’s history. (You can find out a lot by visiting See Southampton’s Facebook page.)

The reason we’re sharing this is because we want to dispel the myth that Southampton is boring and nothing happens here. Southampton is a fantastic, vibrant city, and we want to see it start getting the recognition it deserves.