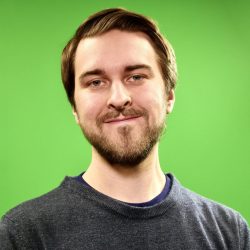 Rowan has always been creatively minded. As a teenager Rowan would create short stop motion animations, music videos and other films with friends, posting them to websites like Newgrounds and YouTube during the early days of online video streaming. Some of his videos received tens of thousands of views.

This passion for the creative arts led Rowan to studying Television & Video Production at Solent University. During this time Rowan became the Station Manager for SonarTV, the university's student-led television station.

Under Rowan's leadership, the station produced its first regular studio show, provided live coverage of events like the students union elections and various local music festivals for the first time, and even co-hosted an ambitious "song contest"-style show that collated and broadcast live performances from other student television stations across the country in real-time through his station in Southampton.

The station's efforts were recognised at the National Student Television Association's awards and conference where it was shortlisted as the third "Best Broadcaster" in the country out of over 40 stations by a panel of industry judges. Rowan was also personally awarded the "Outstanding Contribution to Student Media" award by his university.

In his third year of study Rowan started taking on freelance projects. One notable client led Rowan to working on a YouTube channel called Life On Unleaded which reviewed high performance super-cars. Rowan was the sole video producer for the channel from its inception. During a three year period the channel acquired over 50,000 subscribers, with some individual videos receiving over 1 million views.

Upon graduating from university in 2013 with a First Class Honours, Rowan set up his own video production company, Southpoint Films, which has been providing high quality video production services to an impressive list of corporate clients ever since. (Notable clients include McKinsey & Company, the British Army, the NHS, University of Southampton and Marks & Spencer, to name a few.)

Additionally, Rowan also ran an online "Software as a Service" business called Vimsy for five years, working closely with a team of web developers to design, build and develop the product. Vimsy was publicly available and was used by customers to share videos online, including one client who was using it to share videos with the likes of Nationwide Building Society and BAE Systems.

When not at work you can usually find Rowan at a gig, eating vegan junk food, reading Apple rumour websites, or catching Pokémon in some way, shape or form.